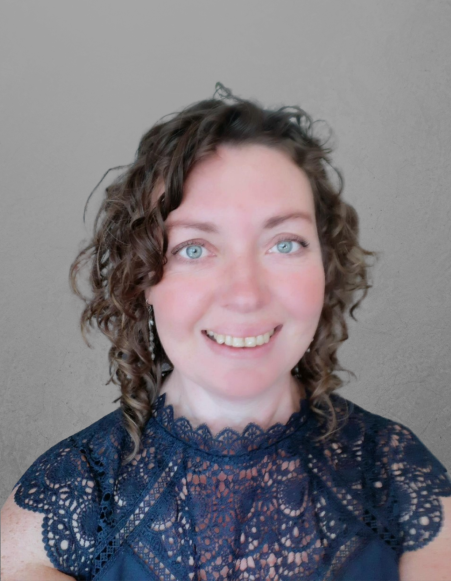 Katie has had a career change to Wellness and Health from Banking & Insurance. She is a health coach and operates a nutrition clinic in Ballina. Katie is dedicated to making the NDIS plan management process as simple and effective as possible - allowing clients to live their best lives with as much independence as possible. Born and raised in Ballina and having lived in both Byron Bay & Lismore, Katie has a plethora of local knowledge and contacts.

About the NDIS in Ballina & Byron Bay NSW

The NDIS was rolled out in the region in July 2017.

Ballina is a town located in the Northern Rivers region of NSW, just south of Byron Bay, and east of Lismore. Ballina is known for its beautiful beaches, fishing, and is home to the Big Prawn. The Ballina Shire has a population of approximately 41,790 and includes the towns of Alstonville, Lennox Head, Wollongbar, Tintenbar, Wardell, Newrybar (shared with Byron Bay), and many more. Aboriginal and Torres Strait Islander people make up 3.1% of the population, which is higher than the national and state averages of 2.5%.

During the period July 2018 - June 2019 there were around 760 NDIS participants. That number is expected to grow to 1,240 by 2023. The largest groups accessing the scheme in the Ballina region are those with Autism or Intellectual Disability.

To ensure everyone has access to enjoy the beaches, Ballina has two beach wheelchairs available for hire.

Some of the recent projects implemented by Ballina Council to support the needs of people with a disability are:
• constructed the first fully Accredited Changing Place toilet facility in NSW
• altered the design templates for the construction of footpaths to improve accessibility
• redevelopment of the public swimming pools in Ballina and Alstonville incorporating accessible pool entry ramps and change facilities

Byron Bay is a Far North Coast town just an hour south of the Queensland border. It is the easternmost point of Australia. Byron is well known as a popular tourist destination bordered by stunning beaches on one side, mountains and rainforest on the other. The Byron Bay Shire has a population of approximately 31,556 encompasses the towns of Bangalow, Newrybar (shared with Ballina), Mullumbimby, Brunswick Heads, Ocean Shores, Federal, Booyong (shared with Lismore), and many other small towns.

During the period July 2018 - June 2019 there were around 310 NDIS participants. That number is expected to grow to 740 by 2023. People with autism make up the largest group accessing the scheme in the Byron Shire.

Lismore is a city in the Northern Rivers region of the Far North Coast of NSW. It is located on the banks of the Wilsons River and Leycester Creek. It is known to flood in heavy rains and suffered badly in 2017 in the aftermath of Cyclone Debbie. It is known for its farming, arts & culture. Lismore is the commercial centre of the Northern Rivers region. The Lismore Shire has a population of approximately 43,135 and includes the towns of Nimbin, Clunes, Eltham, Bexhill, Booyong (shared with Byron Bay), and many other regional towns.

During the period July 2018 - June 2019 there were around 970 NDIS participants. That number is expected to grow to 1400 by 2023. People with autism make up the largest group accessing the scheme in the Lismore Shire.

One of the big issues in the regions of Ballina, Byron Bay & Lismore is that of social isolation and there are several groups currently working on social groups for NDIS participants to meet this growing need.

The shires of Ballina, Byron Bay, & Lismore (as well as others in the region) have worked collaboratively to develop Disability Inclusion Access Plans for each council.

Local Area Coordination is provided by Social Futures and there are 3 offices in the region:

ECEI for the region is provided by Nortcott

Ability Incorporated is a disability advocacy service and they have an office in Alstonville.
They can be contacted on 02 6628 3409

Aruma (formerly House with No Steps) has offices in Lynwood, Ballina & Lismore and offer many services, including Supported Independent Living, Children’s Services, Support Co-ordination, and Supported Employment. They are a large employer of people with disabilities in the region. They can be contacted on 1300 538 746.

Daisi is a local service offering supports with pre-planning, Support Co-ordination and many other things. Their office is in Ballina and they can be contacted on 1800 800 340.

CPL – Choice, Passion, Life is a large provider of integrated support for people living with a disability in Northern New South Wales, and their families. Their office is located in Ballina and they can be contacted on 1800 275 753.

Biala Support Services is an organisation located in Ballina. They offer both “in home” and “out of home” supports, including a school offering independent Special Education for children aged 4 – 18 years. Biala’s day program includes offerings in Music and dancing programs, yoga and exercise, arts and crafts, BBQs and picnics, disco morning, funky fitness or tennis. They can be contacted on 6686 4763.

What Katie’s Clients Have To Say 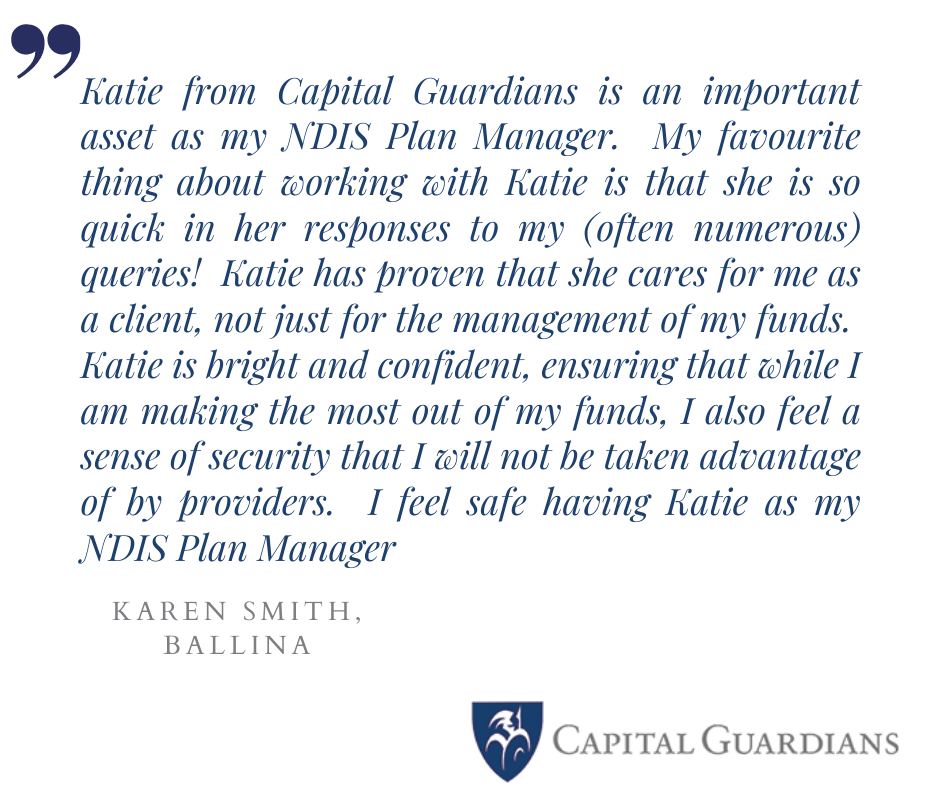 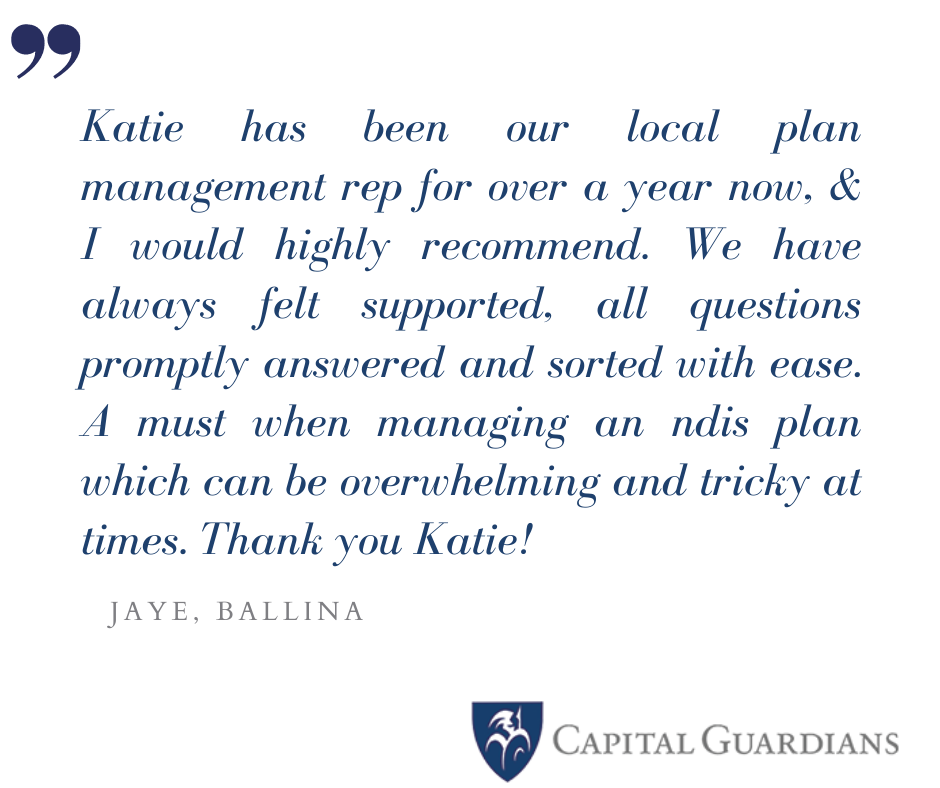 Our local NDIS Plan Management representatives understand your local area because they live and work there.

They’ll work with you to manage the financial aspects of your NDIS plan with ease. You’re free to choose your providers, we make sure they are paid quickly.

We’re here to help you every step of the way.

Your local Capital Guardians representative will:

Who understands your needs and how you can access local community supports.

To service providers of your choice – whether NDIS registered or not.

To ensure your NDIS funding is well allocated and doesn’t run out!

Paying them daily on your behalf.

How do I get started with Capital Guardians?

Can I switch Plan Managers to Capital Guardians?

Yes! You can change plan managers any time. If you intend to transfer over to us during the dates of your current plan, you will need to two things: 1. Contact the NDIA on 1800 800 110 to advise them 2. Request your current/previous plan manager cancels their service booking and reduce their available funds to zero

How much will this cost?

No cost. Being plan managed means no out of pocket costs to you. When you request Improved Life Choices be included in your plan, the NDIA will cover all plan management fees. This includes the initial set up cost (per plan) as we support your transition to plan management, as well as our flat rate monthly fees.

Want to know more or sign up for NDIS Plan Management?

Complete the form below and we’ll be in touch within 24 hours.

About the Author: Patricia Waine